I noted earlier this week how Privium, Condev, ABG Group and Probuild are among the major Australian construction firms that have gone into liquidation over recent months, alongside many smaller builders.

An industry insider also warned that the collapses are only the “tip of the iceberg”, given factors such as rising labour and material costs are squeezing margins, particularly where customers have signed fixed-price contracts.

“The concern is that interest rate rises bring is that it softens the property boom, or eradicates it to a point where the purchaser is worried that the value of their property is not continuing to rise, and in fact may well decline,” Spring said.

“Prices may start to falter even more quickly”.

“For developments in the process of construction at the moment, if they’ve got pre-sales in place, what’s the risk now of those pre-sales actually completing?”…

“It’s inevitable there’s going to be a lot more insolvency in the construction industry,” Spring said, which will inflict a “domino effect” on builders, subcontractors and trades.

The irony of this is that the tsunami of home builder collapses has occurred against the backdrop of near record construction levels, thanks to the HomeBuilder stimulus: 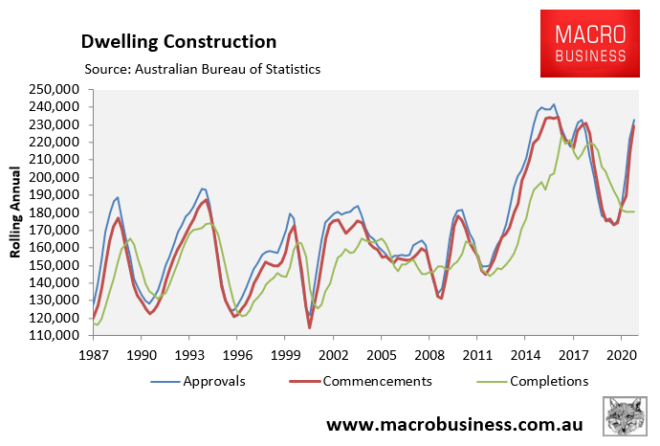 Dwelling construction levels boomed on the back of HomeBuilder.

However, soaring materials and labour costs, combined with the proliferation of fixed priced contracts, has meant that most builders have been unable to make a profit, despite being busier than ever. As such, the Master Builders Association claims 98% of its members are having their profits squeezed or are losing money.

Fri May 13 , 2022
With their rugged looks and celebration of raw materials, industrial decor ideas are now more popular than ever – and it is easy to see why this look is desired so highly, even now.  Blossoming in the 1970s, the industrial décor trend came to prominence when it became popular to […]