As French chef and restaurateur Daniel Boulud puts it, “Kitchens should be designed around what’s truly important — fun, food, and life.”

Kitchens now might not play the center-of-everything roles that they did during the early days of the pandemic. But even if you’re spending more time away, you’ll likely have become a little more attached and invested in the kitchen than you were in 2019.

Some of what’s new in kitchen design and outfitting:

For a few years now, the monotone, all-white kitchen has been popular, with Instagram feeds full of white-and-cream cabinetry and pale woods. It looked clean, and like it meant business – a culinary clinic, if you will, and a far cry from the mid-2000s combo of cherry cabinets and granite counters.

But there’s a shift. The standard, nickel-plated hardware in a white kitchen might now be replaced with matte black and brass, or knobs and faucets in bright hues.

Whites are getting creamier, less cool. You’ll see woods, vegan leather and rattan as textural elements to warm things up.

“The classic all-white kitchen is as relevant as it ever was, but there’s a new need and demand for color,” says Bob Bakes, co-founder and head of design for Bakes & Kropp, a kitchen design and custom cabinetry firm in New York City.

He’s recently used sky blue, stone gray and a red called geranium on kitchen projects, and a glossy black in a butler’s pantry.

Betty Brandolino, founder and creative director of Fresh Twist Studio in Elmhurst, Ill., sees a similar move toward color. “White isn’t out, but we are implementing painted or natural wood islands as opposed to an all-white kitchen,” she says.

Some clients are asking for entire kitchens with painted cabinets, she says: “Green has been the color of choice, ranging from sage to olive and even a brighter green.”

“I’m excited to see that people are becoming more experimental in their design choices, from mixing metals to integrating a variety of textures,” Bakes says.

Lighting is one way to bring personality and modernity to kitchens. Recessed can lights are still with us, but there’s now a lot of statement lighting, too: a row of pendants or a supersize fixture over an island, for example.

While subway tile still dominates backsplashes, some are tweaking how it’s used. “For example, applying them in unexpected patterns such as vertically instead of horizontally, and stacked instead of staggered,” Erin Davis, a designer in Portland, noted on the real estate platform Homelight,

Big sections of ceramic tile are also popular. New tech has allowed makers to make large but thinner, lighter slabs that are easier to work with. And fewer grout lines mean they’re easier to clean.

Bring personality to the backsplash with patterned and textured tile; there are florals, geometrics, metallics and mural tiles that make an artsy background. And you don’t need to buy a lot – create a feature wall on the back of an island, around an office nook, or intersperse custom art tiles with regular ones. Some designers are carrying the tile from the wall down across the floor, for an eye-catching look.

The pandemic made us choose sides when it comes to kitchen layouts. You either embraced an open plan, where everyone could easily interact, or you were grateful for your closed-room kitchen, where some could cook without disturbing others who were studying or on Zoom calls.

“We’re still seeing a desire for open floor plans,” Bakes says. “I don’t think the need to separate the kitchen is making a return quite yet.”

But there are tweaks to the open plan. One example is butler’s pantries – an adjunct space to the main kitchen where mess-making can take place and gear stowed.

“We’re designing more hidden pantries for appliances like toaster ovens, mixers and extra dishes,” Brandolino notes. “This also allows us to incorporate more open shelving and less overhead cabinetry, which is a trend we’ll see more of in the coming year.”

“They aren’t a new trend, but they are becoming even more sleek. New technologies and hardware enable us to design islands that look exceptionally clean and sleek. And with this new hardware, we can have large doors that conceal parts of the kitchen like counters, appliances and even kitchen island seats. The look is continuous and homogeneous.”

Houzz’s 2022 kitchen trends report noted that homeowners were willing to splurge on countertops, with quartz and porcelain expected to be favorite materials. Engineered quartz combines natural stone and resins to make a strong, impact-resistant material. And porcelain can’t be scratched, burned or stained. Both can be made to mimic marble, granite, onyx and other stones.

We’re seeing lighter woods like oak and maple, dark walnut, and even plywood, used as full cabinetry and as accents. What’s especially new are the finishes (most are matte) and the mix of materials: wood with painted glass, buffed metal, ceramic.

Tech continues to move into the kitchen. Samsung’s Family Hub, for instance, puts a five-screen smart display on the fridge. There’s a cooking screen for shopping lists and recipes, an entertainment screen, a smart home screen, a digital calendar/pinboard and one screen you can customize.

LG’s Instaview feature lets you tap in the fridge door to see what’s inside.

Motion-sensitive touchless faucets have been on the market for a few years. If you want to take it up a notch, there are “smart” faucets too.

“You have to look at it with a little humor,” says Maydan. “You consult with the faucet about the water temperature and you discuss the food ingredients with the fridge. You definitely have company when cooking in today’s kitchen!”

Sat May 28 , 2022
NEW ORLEANS (WVUE) – There’s been a spike in construction site thefts on the Northshore according to a home builder and the St. Tammany Parish Sheriff’s Office. “It’s always been around but it’s been extreme, it’s gotten to the point where it’s out of control,” Andy Northcutt with DSLD Homes […] 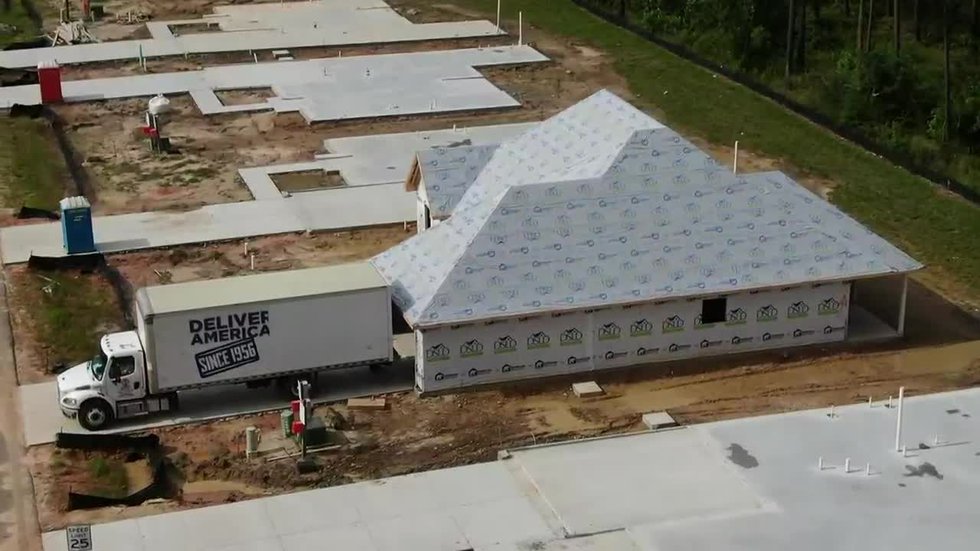